View source
watch 02:23
Wiki Targeted (Games)
Do you like this video?
Play Sound 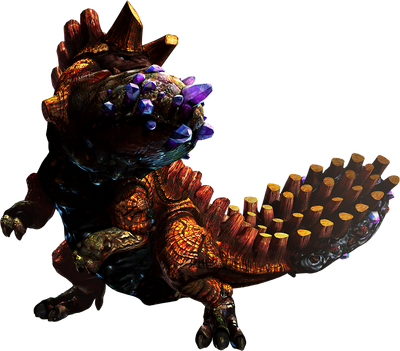 Crystalbeard Uragaan possesses a near identical body shape to the normal Uragaan, yet has a different coloration. With an orange-red body, it blends in well with its fiery, volcanic habitats. In contrast to its overall orange hue, this gem-clad Deviant has shiny, blue-ish purple minerals protruding from certain areas on its body. These gemstones can be found jutting out of its tail and chin.

Crystalbeard Uragaan has the same movesets of their relative, Uragaan, but with minor changes. Occasionally, they will throw a crystal-like rock on the ground from their tail to release sleep gas at hunters. These crystals can also be mined, however.

Similar to Deviljho, Crystalbeard Uragaan can fling rocks at enemies with its chin.

Crystalbeard Uragaan are truly dangerous monsters. Hunters are required to have a special permit in order to hunt them.

Español
Community content is available under CC-BY-SA unless otherwise noted.