Dah'ren Mohran is an Elder Dragon introduced in Monster Hunter 4. It is known to inhabit the Great Desert and can be encountered at any rank. 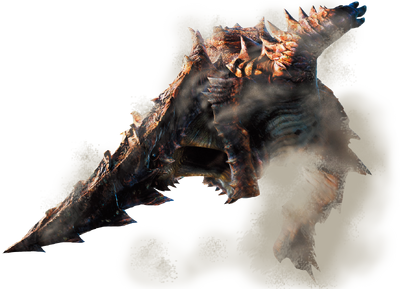 Dah'ren Mohran is a large, whale-like dragon that is covered in armor plating. Unlike its relative, Jhen Mohran, its body is jagged and sharp, with spine-like protrusions on the forelegs and back. In addition, Dah'ren Mohran's face features a single gigantic, knife-like horn that extends several meters from its head rather than the pair of horn-like tusks found on Jhen Mohran.

Retrieved from "https://monsterhunter.fandom.com/wiki/Dah%27ren_Mohran?oldid=795171"
Community content is available under CC-BY-SA unless otherwise noted.