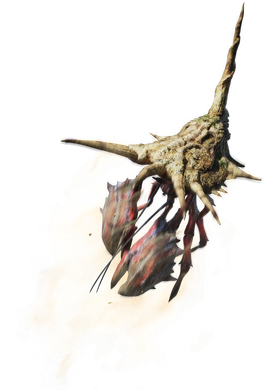 Daimyo Hermitaur has a large, crab-like body. It is covered in a red and white carapace and wears the skull of a Monoblos as a protective shell. It has broad, shield-like claws and long antennae.

It can use its claws as shields to defend itself from attackers, and, as with the Monoblos, can also use them to dig into the earth in order to attack foes from below. It can shoot pressurized jets of water and can use its massive weight to crush enemies.

Daimyo Hermitaur is a rather passive creature, sometimes failing to take notice of hunters standing only feet in front of it.

It prefers tropical to subtropical areas with sands and water such as the Old Desert and Jungle. 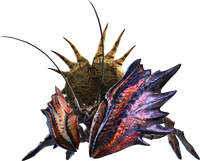 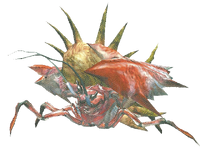 Season 9.0, an HC version is added gaining several new attacks: it can now run rapidly from side to side, swinging its claws; it can jump in the air directly after retreating into its shell; it can come flying backwards out of the ground after digging and Its water beam reaches even further than Plum Daimyo Hermitaur. The ends of its claws and legs will also become red and inflamed. 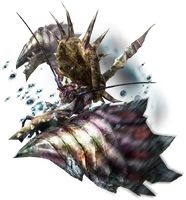 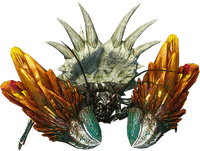 Retrieved from "https://monsterhunter.fandom.com/wiki/Daimyo_Hermitaur?oldid=864141"
Community content is available under CC-BY-SA unless otherwise noted.