Start a Wiki
watch 02:12
What is Dalamadur?
Do you like this video?

Dalamadur is an Elder Dragon introduced in Monster Hunter 4. It is known to inhabit the Speartip Crag and can be encountered at High Rank. 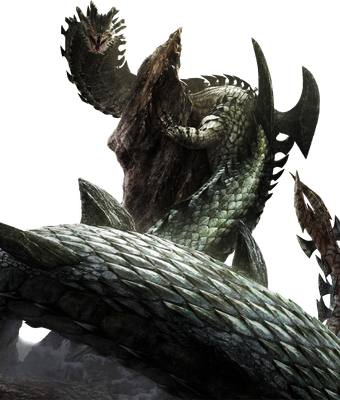 Its appearance is similar to Najarala in terms of body type. It has a snake-like face, with bright red eyes, numerous fangs, and many hook-like spikes along its body which start out clustered around its head and neck, and becoming more spread out along its long body, with a small cluster near the tip of its tail, which is topped with a pair of red barbs that it can rattle in a manner similar to rattlesnakes. Its has a pair of large clawed forearms like Najarala, but the only remnant of hind legs it has are small spurs, similar to pythons, boas, and anacondas. Its chest has glowing vents, which huff steam when it is enraged. Its face and tail will also glow red when in its Raged state.

It is capable of using Fire to attack, and can shoot bright blue balls of flame at the hunters, as well as shooting them skyward to where they fall like meteors, similar to Dire Miralis. When enraged it will use a powerful Flamethrower-like attack, first firing straight at the area and then with a sweeping blast, similar to Ceadeus' water blast.

Dalamadur lives high in the peaks of the Heavenly Mountains that surround Cathar Village. Its numerous hook-like spines may help it navigate the treacherous terrain, as they may provide a more secure grip than it could generate with its claws and body alone. Local rumors suggest that the falling debris that is common in the Heavenly Mountains is the result of Dalamadur's burrowing. It is not known if Dalamadur travels to other areas.

Dalamadur have been seen inhabiting Speartip Crag within Heaven's Mount.

Dalamadur has two Music Themes. The first theme plays in the first half of the quest while the second theme plays when sufficient damage has been done to it.

This music theme is shared with Shah Dalamadur.