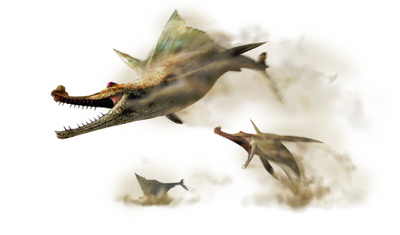 They have, like the Cephalos, the ability to "swim" through sand and even expel small sand blasts from their mouth at attackers. These blasts may occasionally inflict Waterblight. Due to their nimbleness they are difficult to hit with slower weapons. Several appear in the fights with Jhen Mohran and Dah'ren Mohran, jumping onto the boat and attacking Hunters that get in their way. Delex hunt in small groups of six or seven individuals and likely prey upon small animals. They also scavenge off the remains left by larger desert-dwelling monsters, such as Jhen Mohran.

Retrieved from "https://monsterhunter.fandom.com/wiki/Delex?oldid=812510"
Community content is available under CC-BY-SA unless otherwise noted.