Desert Seltas is a subspecies of Seltas introduced in Monster Hunter 4 Ultimate. 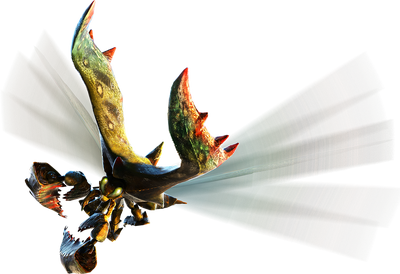 This subspecies features a green, orange and brown shell, and seems to have reduced flight capacity. Its canopy features a double-pronged structure, rather than the single barbed spine of the common species, and its eyes shine a bright green.

Unlike the common species, Desert Seltas is capable of digging through the sand to attack prey from below. It can also shoot three yellow globs that cause paralysis.

Desert Seltas can be found in the Dunes, Ancestral Steppe, and Sunken Hollow.

The prefix Desert was chosen because of the monster's habitat and the fact that the desert is the only environment in which both the Seltas and Seltas Queen of this subspecies can be encountered together.

Retrieved from "https://monsterhunter.fandom.com/wiki/Desert_Seltas?oldid=797273"
Community content is available under CC-BY-SA unless otherwise noted.