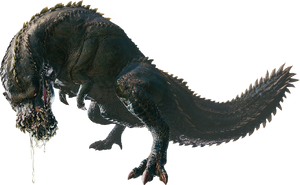 Deviljho is a Brute Wyvern that appears in Monster Hunter: World. Due to its enhanced metabolism, Deviljho must constantly seek out prey. It is extremely violent and known to snatch up large monsters in its powerful maw and flail them around. They can be found in all major biomes (Ancient Forest, Wildspire Waste, Coral Highlands, Rotten Vale. Their materials can be used to craft the Deviljho Armor Set. Deviljho was permanently added to the game on March 22, 2018.

Deviljho is a nomadic monster, prone to wandering vast distances in search of prey. Its status as a super-predator allows it to overtake the territory of any monster that stands in its path. Because of the extreme amount of energy its body consumes, Deviljho is always in search of food sources. It is known to be cannibalistic and is also prone to eating prey alive in order to waste as little time as possible in replenishing its energy.

Deviljho will appear as an intruder in High-Rank quests and expeditions upon completing the ??? Rathian investigation quest. [1] Deviljho can grab smaller large monsters like Great Jagras, Kulu-Ya-Ku,[2] Tobi-Kadachi, Tzitzi-Ya-Ku, and Dodogama in its mouth and use them as bludgeons. It can even grab Odogaron with minimal effort. It can also throw them directly at the player for a considerable amount of damage. Deviljho can still attack while caught in a Pitfall Trap, being able to slam its torso down and in some instances breathe dragonblight. [3]

Deviljho displays turf wars with most "top of the food chain" monsters (Rathalos, Legiana, Diablos, Bazelgeuse[4]) while exhibiting normal combat with "mid tier" monsters, such as Anjanath, Barroth, Jyuratodus, etc. It does not have turf wars with subspecies. Deviljho shares a pin attack with Anjanath, but with the inclusion of causing Defense Down as well as increased overall damage.

Deviljho may launch a counterattack after being staggered. If hit during this counterattack, it will be left in a vulnerable state for an extended period of time and it's Dragon powers would be doused off. The Deviljho will still remain in rage mode, albeit unable to use its Dragon breath and thus the Agitator skill can still remain active even after a successful attempt to exploit this weakness.

The Deviljho is a target in the following quests:

The following is a complete weapon list for Deviljho weapons:

Tempered
Add a photo to this gallery

Retrieved from "https://monsterhunter.fandom.com/wiki/Deviljho/Monster_Hunter_World?oldid=779766"
Community content is available under CC-BY-SA unless otherwise noted.