Start a Wiki
watch 01:40
What is Devilijho?
Do you like this video?

Deviljho is a Brute Wyvern first introduced in Monster Hunter 3. It is known to inhabit a wide variety of environments and can be encountered at High and G ranks. 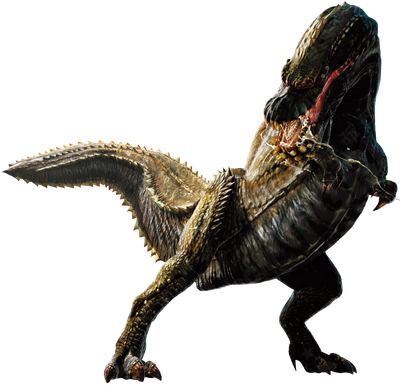 Deviljho is a very large, bipedal Brute Wyvern characterized by its uniform forest green colouration and muscular upper body. Its thick hide is littered with short, jagged spines that reach a maximum height along the back and tail. Deviljho has a narrow snout with a large lower jaw, covered in multiple rows of spines spreading outwards from the teeth. It has massive, powerful hind legs, but tiny, poorly developed forelegs that it rarely utilizes. When provoked, Deviljho's back and shoulder muscles swell considerably. During this period, areas of its skin will take on a bright red colouration.

Because of its nomadic nature, Deviljho is known to inhabit a wide variety of environments, such as Tundra, Deserted Island, and Volcano. Its presence is often disruptive to the natural ecosystem. 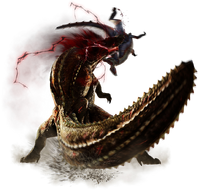 Deviljho makes a return in Monster Hunter 3 Ultimate along with its variant known as Savage Deviljho (怒り喰らうイビルジョー). Savage Deviljho appears slightly different comparing to Deviljho when it is in its enraged state.