Horned Wyvern
Tyrant of the Desert

Diablos are large, bipedal wyverns with powerful armor plating covering much of their body. Their most noteworthy feature is a pair of massive, solid bull-like horns above their red eyes. Diablos also possess a pair of tusk-like fangs and a large, spiny neck frill. Their tail ends with a heavy, studded club that can be used to ward off attackers. Diablos stand on a pair of stocky, wide-set legs and possess a broad upper body complete with thick, muscular wings.

Diablos have the ability to burrow into the earth and travel underground, employing this tactic to surprise unsuspecting targets or slip away from a dangerous encounter. In addition, they are capable of producing a powerful roar that will stun most aggressors. Using their powerful legs in tandem with their heavy upper body and head, Diablos can run at high speeds to charge attackers with their horns, using the powerful momentum to maximize the potential for damage.

Diablos are herbivores, known to feed on the plentiful cacti of the desert. Despite this however, they are wildly aggressive and extremely territorial, and will pursue anything which enters their territory. Diablos are known to use their horns as weapons against attackers, but will also use them in bouts against other Diablos in battles for territory or mating rights. Diablos typically avoid flight for the purpose of transportation, as a disproportionally high mass prevents them from effectively flying for long periods of time. Instead, Diablos will use their wings to free themselves when trapped in the sand.

Diablos are commonly found in dry, arid desert environments. The soft, loose earth allows for digging and the water-rich cacti provide them with both nutrition and hydration. However in Monster Hunter 3 and 4 Ultimate Diablos can also be found at the Deserted Island and Everwood. 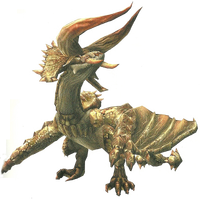 HC Diablos has a new more powerful look, it has very large horns, stronger, vein covered wings,and more muscle mass. It also has new moves and behavior. When it digs, it will pick a target and dig back out at a surprising speed, leaving a trail of large rocks raining everywhere it digs and a new tail attack.