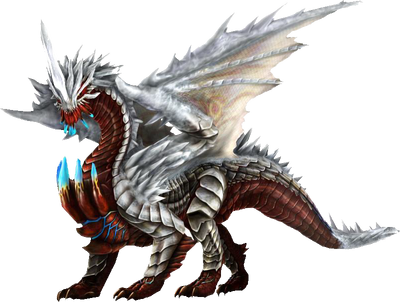 Disufiroa possesses a body structure and behavioral pattern similar to that of Alatreon. Its underbelly is crimson and streaked with blue stripes while its upper body is white in color and bears small pockets of ice frozen to its hide. it has several protrusions tipped light blue in colour on its lower jaw and chest.

It controls a unique element called the Frozen Seraphim Element, which is a combination of the Fire, Ice, and Dragon elements. It uses all of these to a deadly degree in battle. Among its most notable abilities are its ability to summon massive ice pillars, fire a dragon element laser that ricochets off of a fabricated iceberg, and summon massive tornados of fire and ice. However its most infamous attack is used only at the very beginning of the hunt, in which Disufiroa will fire massive spheres of ice and fire that rain across the arena and explode. In its Shiten form, Disufiroa is capable of several buffed versions of these attacks, including a more dangerous and multiplicitive version of it's tornado attack.

Disufiroa is highly territorial and resilient, being able to live in the extremely hostile enviornment of World's End. It attacks hunters with a violent ferocity, often combining its elements in creative ways in battle, such as reflecting projectiles off of ice, or trapping hunters in pits of ice spikes before running them down with a flaming charge. It is even capable of faking its own death akin to Gypceros in order to trick hunters into carving off parts before ripping them apart with tornados.

Disufiroa have only been sighted at World's End.

Disufiroa alongside Unknown is one of two monsters to receive a "Shiten" or "Solstice War" variation.

The fight is largely the same as the Lv9999 Conquest variation but with a handful of new attacks such as more devastating elemental tornadoes and greater tracking on its refraction laser. It gains a new phase similar to Unknown during which its chest protrusions become purple in addition to the blue stripes on its underbelly and the webbing of its wings. Its red scales also turn black in colour and its moveset drastically shifts to faster version of its old attacks, as well as some new large AoE moves.

Once slain Solstice War Disufiroa will give powerful sigils that you can add onto your weapons to increase its stats by varying degrees, change your weapons range stat, or slightly augment its moveset.

Retrieved from "https://monsterhunter.fandom.com/wiki/Disufiroa?oldid=841806"
Community content is available under CC-BY-SA unless otherwise noted.