The Diva (Japanese 歌姫) is a singer found within Mezeporta Square. 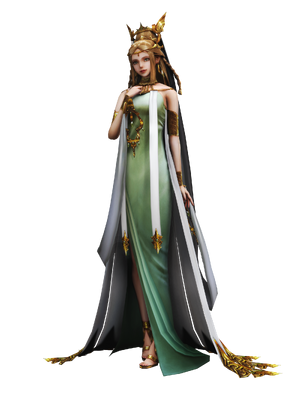 Though not many have of actually talked to the Diva, she is said to have a friendly personality.

At a very young age, she lived in a village within the Bamboo Forest with her sister, Leila. In this place, her people had lived in peace with the bamboo-controlling Elder Dragon, Inagami, for thousands of years. Due to her village taking advantage of the Inagami's strange power in attempt to grow their crops during a bad harvest season, Inagami destroyed their whole village in an outrage. This destruction led her to the Felyne who lived in the forest, becoming her new family. She was then on raised by this Felyne. Through those years, her singing had become recognized in some places, with her singing being considered to be quite mystical from it granting hunters untold strength after hearing it. Though she loves singing, some problems like monsters, such as Rebidiora and Guanzorumu, or illnesses, can prevent her from singing properly.

The Diva wears beautiful green and white dress with shiny pieces of gold on the edges of it, along with a crown-like head piece in her head.

Diva Defence Outfit
Add a photo to this gallery

Retrieved from "https://monsterhunter.fandom.com/wiki/Diva?oldid=748913"
Community content is available under CC-BY-SA unless otherwise noted.