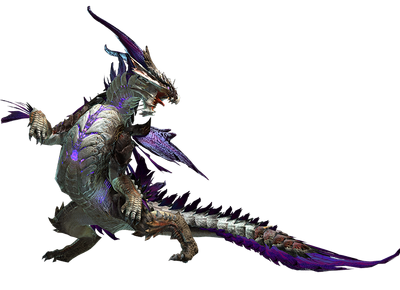 It looks like its relative Estrellian, but with a sinister-like appearance. Doom Estrellian has a pale color on the top its neck through tail, but the tail tip is a reddish color. It has a brown scale tone on the shoulders and upper legs while the front legs have a brownish color as well as its hind legs, but with a darker tone. Instead of orange scales on its face, Doom Estrellian has dark brown scales with three pair of uneven pale feather-like spikes on its lower pale jaw.

Like Estrellian, it has long fiery antennae, a pair of large white slight curved horn on its cheeks, a pair of antlers that is dark brown and the same size as its relative. Its frilled ears are slightly light brown like its relative.

In its first charged state, like Estrellian, Doom Estrellian has a spiky armor which covered its head, neck, wrists, shoulders, back, upper hind legs, and tail. Instead of a fiery orange, its spiked armor is purple in color and they are actually encrusted Star Butterflies.

In its final charged state, Doom Estrellian has an insect-like armor that is the same as its relative but with a different coloration. The armor-like shoulder insect wings, feather-like armor at the tip of the tail, insect-like wrist armor, upper hind leg armor, and insect-like spike armor on top of its neck through tail, are colored bright fiery purple. Also its underbelly with cracks is glowing purple.

Like its relative, Doom Estrellian lived in the Moonlands, but instead of Esther Lake it roamed Ancestral Tomb.

Retrieved from "https://monsterhunter.fandom.com/wiki/Doom_Estrellian?oldid=812989"
Community content is available under CC-BY-SA unless otherwise noted.