Doragyurosu is a subspecies of Berukyurosu that first appeared in Monster Hunter Frontier Season 8.0. It lives in the Snowy Mountains, but has also been spotted in the Highland and Great Forest Peak. It is capable of using Dragon Element attacks. 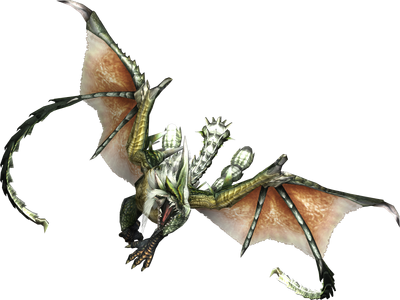 The fur on its head turns orange when enraged and it harnesses an even more advanced moveset than Berukyurosu.

It is one of the few monsters capable of paralyzing Hunters with Dragon-Element attacks. Hunters can fight Doragyurosu at HR91+. Doragyurosu's attacks include jumping up in the air and using its long wings to hurl rocks, flying above the hunter then slamming down hard at the ground with great force, flying around in a circle then releasing a storm of its signature Dragon Element capable of paralyzing hunters, jumping backwards and releasing thunder balls that travel on the ground similar to the Khezu. 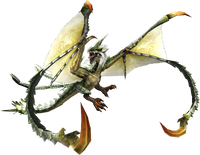 It appears to be an older Doragyurosu with more developed spikes on its back and tail, longer more powerful claws, yellow wing webbing, more orange legs and golden eyes.

HC Doragyurosu is more deadly than before using improved and more agile attacks more frequently and new attacks originally only seen used by Berukyurosu including following a target while flying using a homing beam attack and the bite attack that causes instant red sharpness.[1]

Shares the same appearance as HC but with minor changes: It appears to be in permanent rage, after it appears to die, it will rise again causing an explosion of dragon thunder and will be in a new rage form with dragon thunder beneath it, causing rocks to float off the ground like the area has no gravity, even when high above in, the sky rocks will fly off the ground below it.

It appears the guts skill cannot be triggered in its presence and Minamotto drinks are unable to be used. Even at a defense of 1000 this monster is able to cause deadly damage and will kill Hunters in a single hit. 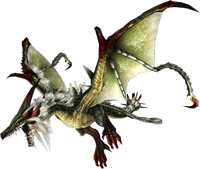 The final and strongest form of Doragyurosu able to be hunted at SR300.

This overpowering monster is one of the most deadly monsters in the series with completely unbelievable power. So much power that the reason for parts of it turning red in rage is from it burning its own skin.

Appearance changes are burnt red tail spikes, claws, feet and horns. Green wing webbing, dark end of its beak and bright yellow eyes. In rage, it becomes burnt and overflowing with Dragon Element from head to tail and its eyes turn red.

It is even more powerful than the feared and rare Phantom Doragyurosu using improved and behavior changed moves from Berukyurosu and all other forms of Doragyurosu excluding Phantoms low altitude storm release.

It also has new attacks including jumping into the air and using its long wing fingers to lift a chunk of the ground big as the monsters its self into the air followed by blowing it up with its beam making it rain rocks in a extremely wide area, an extra U-turn spin added to Phantom Doragyurosu's U-turn dragon kick catching unexpected hunters off guard possibly instantly killing them, lift into the air making a odd wind blast roar that causes a fall to your knees KO status followed by repeatedly chasing a target with somersaults using its tail and more wide ranges its claws spinning as a weapon and a improved dragon element somersault with wider range.

Upon what appears to be death at first, much like Phantom Doragyurosu, it will rise again but it will start with sparks of dragon thunder then cause a bright red explosion bigger than Phantom Doragyurosu's and be completely burnt red over its entire body in a permanent final rage. Its speed is insanely increased along with its attack power meaning all its previous attacks are greatly increased in speed and power. Its beams will now be wider than the monster its self and have incredible possibly unlimited range across the area and it will chase a target firing this beam up to 3 times possibly ending in instant death or triggering the hunters guts skill if they decided to bring any. It gains a new attack where it jumps into the air once again making the KO status causing roar this time followed by making wind to throw those ahead of it into the air with no invincible time followed by releasing a free roaming forward heading storm of dragon lightning hitting those who are in the air letting them fall to their death. All its dragon explosion attacks like when a Doragyurosu goes into rage or other moves that use the explosion now have a more wide range and make a red flash with range almost reaching across the whole area that will either possibly instantly kill a hunter or paralyze them.

This is one of the most feared monsters in MHFO and to many's pain has materials needed for various equipment upgrades forcing many to have to hunt this monster if they want the equipment that needs materials from it.

Retrieved from "https://monsterhunter.fandom.com/wiki/Doragyurosu?oldid=674516"
Community content is available under CC-BY-SA unless otherwise noted.