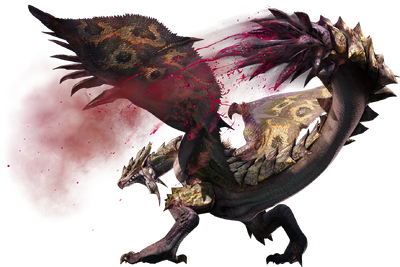 A Dreadqueen Rathian tends to be bigger than normal Rathian, while also having a purple tint on her scales, as if poison had been seeping through all parts of her body. Poison can be seen secreting from a Dreadqueen's tail whenever she attacks with it.

Dreadqueen Rathian have the same moveset as their relatives, however, they also have new attacks. They often use their poisonous tails to attack hunters and inflict either poison, noxious poison or deadly poison. Also, much like Gold Rathian, Dreadqueen Rathian are capable of combining a flame bite and a poisonous tail attack, making them even more dangerous.

Sometimes when enraged, Dreadqueen Rathian will fly high up and then plummet down onto their targets while also attempting to hit them with their poisonous tails.

Dreadqueen Rathian are truly dangerous monsters and a lot more lethal than normal Rathian, being much more territorial, and they're ultra-aggressive, attacking hunters mercilessly with extreme graphic violence. Hunters are required to have a special permit in order to hunt them.

Dreadqueen Rathian inhabit a great variety of environments much like their relatives.

Retrieved from "https://monsterhunter.fandom.com/wiki/Dreadqueen_Rathian?oldid=849902"
Community content is available under CC-BY-SA unless otherwise noted.