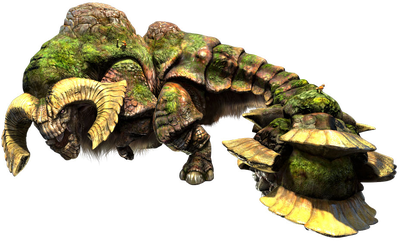 Duramboros is a bulky, heavyset, bovine monster with stocky, muscular legs and a thick upper body. It features a very thick outer hide that is riddled with heavy folds, with a row of armored plates running along its back and tail. Duramboros' most distinctive features include its massive tail club, twin brow horns, and a pair of energy-rich dorsal humps. Duramboros' slow lifestyle often results in a layer of moss and algae growing upon its hide, most noticeably along the back.

Duramboros is a herbivore, subsisting primarily on fallen tree trunks. Using its ram-like pair of horns, as well its hammer-like tail club, it is known to push or knock down weak or dead trees in order to comfortably feed on them. Though generally docile, Duramboros has a capacity for aggression if provoked. It is known to use its tail club, horns, and overall mass to attack foes. One of its most unique tendencies is to twirl in place, using its tail club as a counter-balance to build up momentum, allowing it to hurl itself at an attacker and crush them with its body.

Due to its diet, Duramboros is most commonly encountered in highly forested areas, such as the Flooded Forest or Misty Peaks.

A Variant of Duramboros first appearing in Monster Hunter Explore.

Retrieved from "https://monsterhunter.fandom.com/wiki/Duramboros?oldid=842428"
Community content is available under CC-BY-SA unless otherwise noted.