Second
Emerald Congalala is a Fanged Beast and a Subspecies of Congalala introduced in Monster Hunter Freedom Unite. 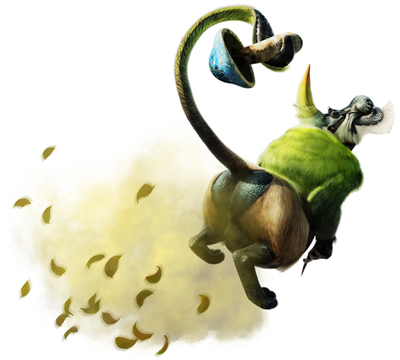 In addition to its green and white colouration, it has a large beard and a taller hair spike than the normal Congalala. It can also produce greater amounts of gas, and farts even more often than the Congalala.

When the Emerald Congalala eats the object that its tail is holding it can breathe out a variety of dangerous stomach fluids. If it consumes a mushroom, depending on what kind, the breath will cause either Poison, Sleep, Paralysis or even become flames. If something else is eaten, the breath will have the same effect as the farts.

The Emerald Congalala are very curious of its surroundings, but also more aggressive and less social than normal Congalala. They are rarely seen with young Congas.

Green Congalala are mainly found in the Old Jungle and Great Forest, as well as the Sunken Hollow and the Everwood in the fourth generation.

Retrieved from "https://monsterhunter.fandom.com/wiki/Emerald_Congalala?oldid=867789"
Community content is available under CC-BY-SA unless otherwise noted.