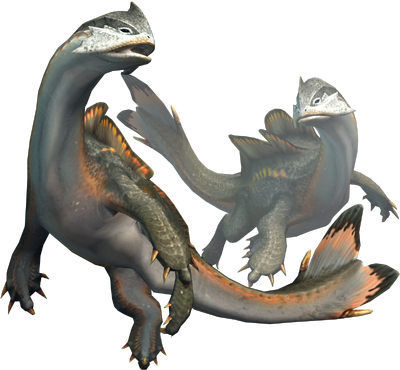 Being very timid creatures, they will generally flee when attacked. However, they will occasionally fight back with slams and tail slaps. These however are not strong and they are easily brought down.

They will swim around underwater and occasionally come to the surface. They only occasionally stop, allowing hunters to attack.

They swim in small groups in both the ocean off the Deserted Island (Areas 10 and 11) and the underwater areas of the Flooded Forest.

Retrieved from "https://monsterhunter.fandom.com/wiki/Epioth?oldid=816307"
Community content is available under CC-BY-SA unless otherwise noted.