Eruzerion is an Elder Dragon that has a body shape similar to Zinogre, but with different unique features. The right side of its body has an icy blue color while its left has a fiery red color. The rest of its body is covered with grayish scales and plating. Long, bristly fur extends from its limbs, back, and tail. On its head, Eruzerion has unique ram-like horns that are separate elemental colors like the rest of its body. Lastly, the right side of its face is blue while the other is red with yellow slitted eyes.

Somewhat similarly to Disufiroa, Eruzerion can control the Fire and Ice elements. In Eruzerion's it controls the elements with each side of its body, namely with each of its horns. It can not only use Fire and Ice separately in the form of breath and projectile attacks but also combine both elements into powerful elemental blasts. It also has great physical strength and is capable of causing quakes by slamming its body or both of its front claws. When enraged, an aura will cover each of its two sides and its elemental prowess will progress even further.

Like most Elder Dragons, it is incredibly territorial and aggressive. It is said to be a quite intelligent monster that combines calm with passion.

Eruzerion has only been found living in the Tower. 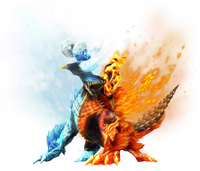