Espinas Rare Species differentiate themselves from the other types with their snow white underbellies, very light grey armor plates, and purple thorns.

It uses moves similar to that of the other Espinas, but with some improved aim and a new, exclusive attack, that could devastate whole hunting parties, and change the course of the entire quest, as it flies into the air, and fires a huge reddish-purple fireball to the floor; the blast created by this explosion fires a huge wave of fire and poison which envelopes vast swathes of the area. After the initial wave, if no one trips Espinas Rare Species it will stomp and various spots will still be on fire and poisonous, making them painful to traverse.

Espinas Rare Species is beyond every other type of Espinas in terms of aggression, going into a rage the second it is awakened.

This species of Espinas inhabits the Great Forest Peak. 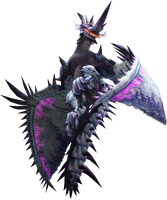 New attacks include breathing poison mist that rapidly forms into puddles, producing smaller toxic tornadoes, and shooting a blazing tornado before soaring upwards to knock hunters off their feet.