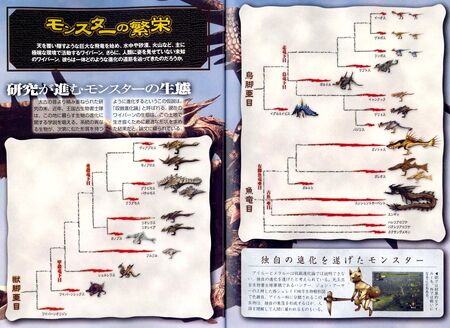 The Ancient Serpent (Japanese エンシェントサーペント) is a giant Piscine Wyvern that lived in ancient times. Though rarely seen, this species continues to thrive today. Unlike other Piscine Wyverns, this monster's legs and wings have degenerated overtime, only leaving small remnants of those parts behind. Though this monster is rare, it is requested by the Hunter's Guild to slay the Ancient Serpent on sight. This is due to it being quite destructive for settlements in the sea, leading to it being considered an Elder Dragon-Level Monster by the Guild.

Bajirisu (Japanese バジリス) is an extinct species of Bird Wyvern that was the relative of Gypceros. This Bird Wyvern had a scaly shell that covered its back and tail, protecting it from incoming attacks, while Gypceros has a rubbery hide. Though it lacked a flash from its crest, Bajirisu is believed to be able to spit poison like Gypceros and use its club-like tail as a weapon. It is said that this monster went extinct, because it was out competed by other Bird Wyverns like Gypceros and Yian Kut-Ku that appeared at around the same time.

Borudoru (Japanese ボルドル) is the ancestor of all "winged" Bird Wyverns and believed to be the direct descendent of Hypnocatrice. Though its appearance is similar to Hypnocatrice, Borudoru has a few differences from it. Unlike Hypnocatrice, this monster was purely a carnivore and lacked feathers. This species eventually evolved into some other species of Bird Wyvern, such as Bajirisu.

Canopus (Japanese カノプス) is an extinct species of Flying Wyvern that was the close relative of Rathalos and Rathian. Though the Raths were its close relatives, Canopus was a quadruped like Tigrex with a body covered in a large plate-like shell. This plate-like shell inhibited its movements, though protected it from some attacks since it had large gaps in between its armor. In order to better protect itself from threats, Canopus evolved a long neck in attempt to deal with threats, but this did very little to help this now extinct species. Canopus eventually went extinct due to its poor adaptions and being out competed by other species.

Garutoto (Japanese ガルトト) is believed to be the ancestor of all Piscine Wyverns. Not much is really known about this ancient monster.

Igurueibisu (Japanese イグルエイビス) is the ancestor of all Bird Wyverns. Though it is a Bird Wyvern, Igurueibisu shares the same common ancestor as Wyvern Rex, however, it evolved before this ancient Flying Wyvern. Igurueibisu was covered in blue feathers with razor sharp talons and a cutting beak. It was predatory in nature and used these adaptions while hunting.

Keputosu (Japanese ケプトス) is known as the ancestor of all "raptorial" Bird Wyverns, such as Velociprey and Jaggi. It is said that Keputosu was a Fish-Eating Wyvern (Japanese 魚食ワイバーン), even showing high intelligence. Keputosu would throw rocks in large bodies of water in order to catch fish and use its long hand claws to hold onto prey. It also had a prehensile tail used for holding some objects. There is even a belief that Keputosu could mimic the calls of other monsters like Qurupeco. Keputosu was able to somewhat fly, but wasn't able to run like other Bird Wyverns. It could run, but it was said Keputosu was still evolving strength in its legs for longer distances. Eventually, some Keputosu evolved into these smaller "rapotorial" Bird Wyverns that could run and hunt effectively for long distances, while others just simply went extinct.

Kuragumosu (Japanese クラグモス) is the ancestor of Monoblos, Diablos, Gravios, Gureadomosu, and Varusaburosu. Not much is really known about this Flying Wyvern, however, it is suggested that it loved feeding on ore and was heavily armored like its relatives.

Sherureusu (Japanese シェルレウス) is a further evolved Wyvern Rex and the extinct ancestor of Rathalos. Sherureusu had a hard shell, long horns, and a barbed tail like the Raths, though walked much like Kushala Daora. It is said that Sherureusu was a powerful predator, but still went extinct due to environmental changes while it was further changing.

Origin Wyvern (Japanese ワイバーンオリジン) is a species much older than even Wyvern Rex. Very little is known about it, but it is believed that the Origin Wyvern shares the same ancestral roots as Akantor, Ukanlos, and Odibatorasu. Scholars have been trying to discover more about this titan.

Wyvern Rex (Japanese ワイバーンレックス) is the ancestor of all Flying Wyverns and its direct descendant is Tigrex. Wyvern Rex wasn't capable of flying like Tigrex due to its smaller wings. Though Wyvern Rex couldn't fly, it and Tigrex actually share the same spine. It is confirmed to be an extinct species.

Wyvern Rex
Add a photo to this gallery

Retrieved from "https://monsterhunter.fandom.com/wiki/Extinct_Species?oldid=785539"
Community content is available under CC-BY-SA unless otherwise noted.