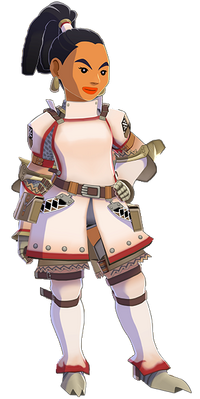 Fahail is a trustful person that respects other hunters, however, she is wary of monster riders.

Like Reverto, she is a veteran hunter for her village. She acts as the guardian of Albarax, while also occasionally assisting hunters in other lands. Right now, she has been seen working together with Gentor after Albarax is under attack by a strange Diablos.

She is known to generally wear Khezu armor with her Light Bowgun.

Retrieved from "https://monsterhunter.fandom.com/wiki/Fahail?oldid=815005"
Community content is available under CC-BY-SA unless otherwise noted.