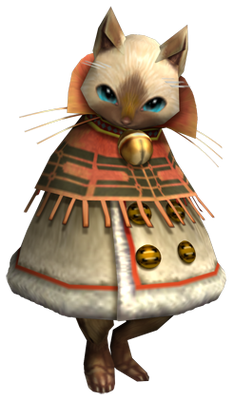 Felcote is a very secretive individual that is seemingly calm and polite. Though something seems off about Felcote to some.

It is unknown what her early life was like, but it is known that she joined the Hunter's Guild at some point. Her job is to search for extremely talented hunters in the world and send them on secret requests to test their skills. Felcote does this to recruit new hunters into the Hunter's Guild highest ranks of honor.

She wears a coat that was made specially by the Guild.

Retrieved from "https://monsterhunter.fandom.com/wiki/Felcote?oldid=748956"
Community content is available under CC-BY-SA unless otherwise noted.