The fifth generation of Monster Hunter introduces a vast array of never-before-seen gameplay features. Notably, a much greater emphasis has been placed on tracking monsters. As such, the player must now look for clues in the environment to ascertain the whereabouts and nature of the target monster, such as footprints, residue, food scraps, etc. The player is also able to partake in stealth tactics in order to avoid being detected by monsters large and small. In addition, a new type of gear is introduced in the form of "mantles"; different types of coverings that can be worn over top of the player's armor in order to achieve certain goals such as camouflage, elemental resistance, and more. Areas now feature Endemic Life to gain temporary or lasting buffs, inflict debuffs on monsters, or trigger an environmental trap.

The game world in quests is now significantly different as well. Maps, while still divided into numbered sections, no longer feature any loading screens, and transitioning between zones now involves physically travelling through corridors, caves, and other actual map areas. The maps are now up to 2.5x larger than in previous games and have multiple base camps as a result. At the beginning of a quest, a hunter will spawn at one of these base camps, which can be fast-travelled to later on. Players can now also change their gear mid-quest, since the nature of the monsters that will be encountered will not always be known, and can restock supplies while out in the field. During quests, players can choose to launch a flare into the sky, which will beckon other online players to drop into the active quest to assist.

Combat has been changed up somewhat as well. While monsters can still be mounted like they could in the Fourth Generation, they are now significantly more aggressive during the minigame and can knock the hunter off by slamming into the environment, among other ways. Hunters can now also use their main weapons while mounted as a finishing move. Players now have access to an item known as the Hunter's Sling, which functions as both a grappling hook that can be used to traverse the environment and as a slingshot to fire a variety of ammunition at monsters. Iceborne adds the Clutch Claw function, which allows hunters to grapple onto a monster to weaken them, drop Slinger ammo, or force their movement.

Monster behavior and interactions have experienced a major overhaul. Most monsters will not attack on sight, and even aggressive types will not immediately attack. Certain monsters can have Turf Wars with each other, a special battle animation that deals severe damage to the weaker monster or equal damage to both. Monsters can also be staggered, knocked down, and afflicted with ailments by other monsters far more easily than in previous games, making the intrusion of another monster sometimes a blessing in disguise.

Many gameplay elements were streamlined: gathering is nearly instantaneous with the option to auto-craft, the item box and canteen are available mid-quest from camps, the player can now move while consuming rations and potions, and whetstones and pickaxes are now infinite and no longer take up inventory space while bug nets have been removed altogether. Paintballs are no longer used and have been replaced by Scoutflies, which can be used as a waypoint marker on the map, leaving a trail for the player to follow. Iceborne added the Raider Ride ability, which allows players to summon a tamed monster to be used as a steed and ride it to a marked destination.

Monster Hunter Rise's main gameplay feature is an increased focus on vertical movement (hence the name). Maps are once again large and seamless with multiple layers. Players can use the Wirebug to swing across maps, run up and along walls, and soar between areas. The Wirebug also allows access to jumping attacks at any time and quick recovery from a knockdown. The player has access to a new companion alongside Palicoes: Palamutes, which can be used to rapidly traverse environments much like the Raider Ride in Iceborne, and take a more offensive role in combat.

The Hunter's arsenal and moveset is largely pulled from Iceborne with a few tweaks. Silkbind Attacks consume the Wirebug gauge to perform especially powerful offensive or utility moves. The Switch Skills mechanic allows players to change out certain parts of their moveset.

Mounting is replaced by Wyvern Riding. Dealing damage with aerial attacks, using Silkbind Attacks, or having another large monster attack will allow Hunters to take control of monsters. In this mode, hunters can command a monster to attack, move them around, or launch them around. Dealing enough damage to other monsters will enable a finishing move. Slamming monsters into walls (or each other) will restrict the monster's movement for a few attacks. However, Wyvern Riding is significantly harder to trigger than traditional mounting, and the same monster cannot be ridden again for 10 minutes.

Rise features a new gameplay mode called Rampage. This unique mode has players defend the Red Stronghold from an onslaught of monsters. Players can set up defenses or join in on the attack. Completing Rampage Quests rewards special items that can be used to augment or craft gear. Certain especially powerful monsters are exclusive to this mode, mainly the formidable Apex Monsters.

World's tracking and Scoutflies do not make a return in Rise, with monsters simply appearing on the map by default.

The fifth generation introduced an assortment of new monsters. Two new classes were revealed: Relict and Wingdrake. The following monsters are known:

The fifth generation saw the return of all 14 previous weapon types. It is unknown whether new weapon types will be added as well.

The fifth generation features an assortment of new areas. The following areas are known:

The villages featured are the following: 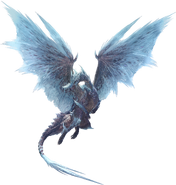