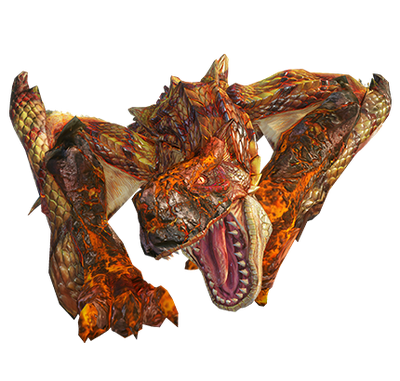 Flame Tigrex are like their adaptive relative but with cooled lava covering their face and claws. Unlike Tigrex, Flame Tigrex has red eyes and red stripes instead of both being blue.

Flame Tigrex has the same move sets as their relatives Tigrex. However, unlike their relative, Flame Tigrex are capable of breathing a fire beam that can cause the cooled lava on their heads to heat up. Unfortunately, Flame Tigrex must cool down from doing this attack which can leave them open for hunters to attack them.

Flame Tigrex can roar like an enraged Brute Tigrex, when either in their Rage Mode or not.

Like Grimclaw Tigrex, Flame Tigrex will sometimes slam their claws on the ground to make shockwaves.

Flame Tigrex only lives in the Ghost Rune Volcanoes.

Retrieved from "https://monsterhunter.fandom.com/wiki/Flame_Tigrex?oldid=797441"
Community content is available under CC-BY-SA unless otherwise noted.