The fourth generation of Monster Hunter is comprised of the fourth set of four games released between September 14th, 2013 and August 28, 2018. The fourth generation built upon the established re-workings of the third generation, while re-introducing a wide array of content from older installations.

The fourth generation's most notable gameplay alteration is the inclusion of three-dimensional terrain. For the first time, players could traverse a vertical environment as well as a horizontal one. In co-ordinance with this, the addition of jumping attacks and monster mounting was made. Here, players could jump down from a height, perform an attack while falling, and climb onto the back of the downed monster to cause damage with their hunting knife. If the mini-game was successfully completed, the monster would topple over, allowing for free hits, but if failed the monster would throw the hunter off their back. However any status effect caused by other hunters, such as flinching, paralysis, sleep, etc., will automatically cause the mini-game to fail.

Another major feature introduced in the fourth generation was the Frenzy Virus. Monsters could now become "infected" with a virus which causes them to become more vicious and challenging, and a new status ailment was introduced in the case of a hunter becoming infected. Furthermore, for the first time, multiple offline villages were included, allowing the player to travel from village to village, meeting new characters and undertaking new quests. For crafting Palico equipment, a new mini-game known as "Meownster Hunter" was implemented. It acted as a game of rock, paper, scissors which allowed the player to fight miniature versions of monsters in order to obtain scraps.

The fourth generation also marks the first time that materials from monsters not present in the game itself could be obtained, through the use of the Wycoon. Free-hunt was also significantly upgraded. The Everwood was introduced, which is a completely randomized map where the monsters, items, and even area layout changes every time it is entered.

With Monster Hunter X/Generations came the addition of Hunting Styles and Hunter Arts, adding a new layer of depth to hunter customization. Also, for the first time in the main series, players could play as a Felyne hunter, the Prowler. Numerous systems implemented in Monster Hunter 4/4 Ultimate were also revamped.

Mounting in X/Generations is generally more difficult to execute than in 4/4 Ultimate, with monsters having increased resistance to mounting. The most notable change in mounting is that once the hunter climbs on the monster, the monster becomes immune to damage and status effects, and instead any attacks dealt by other hunters will aid in toppling the monster. However, a status effect can still occur before the hunter climbs on, automatically failing the mini-game and forcing them off.

The Frenzy Virus in monsters was replaced with the Hyper State. While still ferocious and more powerful like the Frenzy Virus, hunters attacking a spot shrouded in black mist will fill the Hunter Art gauge(s) faster.

New to Generations are the Deviants, upgraded and extremely dangerous variants of monsters similar to the Hardcore monsters from the Frontier series. Challenging Deviants requires spending Special Permits due to the danger inherent with fighting them.

The Meownster Hunters system is no longer a "rock, paper, scissors" game, but instead a pinball game. Palicos are fired across a board and will gather materials when landing on an indicated spot. In addition to Palico equipment, scraps can also now be obtained from trading in monster parts or crafting/upgrading weapons, and can be used to upgrade Hunter equipment.

Crafting and upgrading equipment has been overhauled. Weapons are now leveled up like armor instead of being directly upgraded to the weapon's next form, with the weapon receiving a new name and description upon being fully upgraded. Armor does not require specialized rare drops like plates and gems to craft, only to upgrade fully. In addition, armor upgrades sometimes require materials, not just Armor Spheres. Some upgrades allow the player to select materials from a list, with each material having its own value, to reach a certain required amount.

The fourth generation introduced two weapon types, both of which were Blademaster weapons. Monster Hunter Generations also introduced the ability to play as the Palico.

The fourth generation featured twenty-three hunting grounds. Thirteen of these were general hunting grounds meant for multi-purpose exploration and traversal, two were battle arenas, and eight were special boss areas. Six of these were remakes of areas from older installments.

The fourth generation is thematically centred on a travelling caravan. As such, the environments are diverse, and the colours are much more saturated than in previous games, perhaps to convey a sense of exploration or novelty. Aesthetically, much of the accompanying visuals revolve around a puppet-show theme, with small caricatures of characters and monsters on sticks present on loading screens and in mini-games. 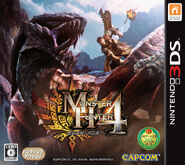 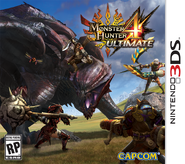 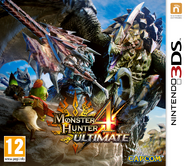 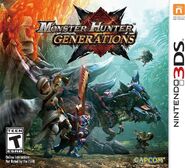 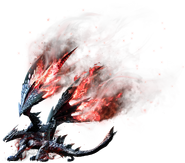 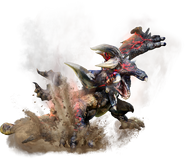 Bloodbath Diablos
Add a photo to this gallery

Retrieved from "https://monsterhunter.fandom.com/wiki/Fourth_Generation?oldid=805336"
Community content is available under CC-BY-SA unless otherwise noted.