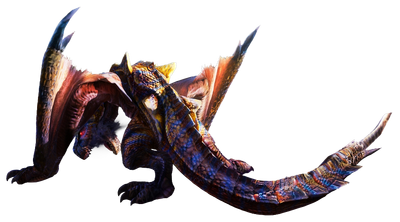 In large monsters, the Frenzy Virus causes a notable discoloration of the skin, fur, feathers, or hide, resulting in a dark purple hue all over the body. In addition, the monster's eyes will become a bright red and it will begin to huff a dark purple smoke from its mouth as it exhales. As its name suggests, the Frenzy Virus causes massively heightened aggression, speed, and strength in monsters, making them dangerously short-tempered and ferocious. The Frenzy Virus also seems to affect a monster's vocal cords, rendering all vocalizations shrill and harsh in sound.

In humans, the Frenzy Virus's effects are significantly different. Once infected, a person will experience a nullification of their natural healing abilities, making it impossible to recover health without the aid of healing items. They additionally receive more damage from a frenzied monster's attacks.

The Frenzy Virus originates as a bodily function of the Gore Magala, Chaotic Gore Magala and Shagaru Magala monsters. The virus is bound to the dander-like scales that cover its wing membranes. When spread, the scales scatter through the air and can be detected by the Magala's sensory organs to perceive the environment, compensating Gore's poorly developed eyes. However, these tiny scales can be inhaled by other creatures and bring the virus along with them, resulting in an infection. Shagaru Magala, as the adult form of Gore Magala, spreads the virus in the air at a much more accelerated rate than its juvenile form, giving off a constant dark aura around the field that only disappears once its dead. All Magalas possess a breath attack which is loaded with the Frenzy Virus, as a means of spreading the virus offensively.

Once infected, monsters can further transmit the virus to other monsters through bites, scratches, and breath attacks. The virus requires an incubation period before the onset of symptoms which varies from minutes to hours, depending on the nature of the infected creature.

The Frenzy Virus can only be cured by sleeping in the base camp bed, otherwise its effects can only be waited out or temporarily diminished. In humans, the onset of the virus can be fought off through dealing enough damage to monsters, and the incubation period can be prolonged with the consumption of a Nulberry or by stepping through a Portable Steam Bomb. If the incubation occurs, the only way to cure it is to either sleep in the base camp bed or remain inside a Portable Steam Bomb for a few seconds. If a human manages to treat the Frenzy Virus, they will receive an affinity bonus, and become immune to being infected for several minutes.

In monsters, hunters can use Wystones on their weapons, which suppresses the effects of the virus for several minutes. They are also known to be able to overcome the virus on their own, but how they do so is a mystery.

In humans, the virus is not known to be fatal, despite its harmful effects; once the infection has begun, its effects generally last for several minutes before vanishing. Most monsters, on the other hand, die from the Frenzy Virus within a matter of days if they are not killed by hunters first.

When monsters manage to overcome the Frenzy Virus they will be able to suppress the Virus' fatal afflictions while retaining its benefits; and even use the virus itself and weaponize it for their own use, turning them into a completely new threat entirely. This is referred as the Apex State.

Similarly to the Frenzy Virus, monsters affected by the Apex State will have a dark purple hue over their bodies with the addition of some reddish shades. Their eyes will also be red, and they will exhale a dark mist from their mouths. The main aesthetic difference from Frenzy Virus is that Apex monsters will be surrounded by a dark smoke-like aura at all times. A monster's roar will also be greatly distorted when affected by the Apex State.

In full control of the Frenzy Virus with no ill effect, the monster under the Apex state is far more brutal, durable and relentless than they would be under the regular effects of the Virus. In addition to infecting unfortunate victims, their attacks can also leave lingering pools of the Virus, much like the Gore and Shagaru Magala. Some of the Apex monster's attacks may also be enhanced in this state with various upgrades such as longer range or near fatal damage.

While under the Apex state, their skin is far more rigid and harder to damage, so even the strongest weapons with the highest sharpness or with an ESP skill will bounce and elemental and status effects will be nullified. They will also receive 80% less damage from all attacks and gain an immunity to traps. However, by using special Wystones the Hunter will be able to inflict status/elemental damage to monsters, or successfully attack them without bouncing. The Apex state can be temporarily suppressed with the use of these Wystones, much like the regular Frenzied state.

So far, monsters that are known to be able to be affected by the Apex State are Deviljho, Diablos, Gravios, Rajang, Seregios, Tidal Najarala, Tigrex and Zinogre. 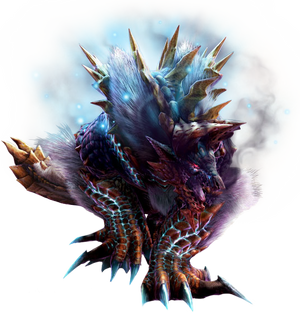 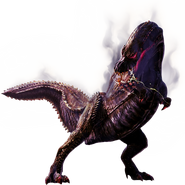 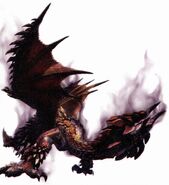