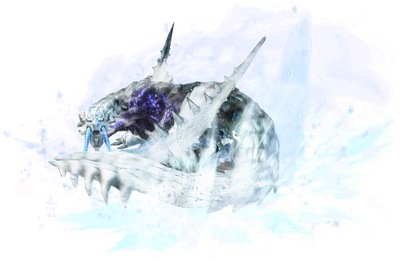 Frozen Barioth have the same appearance as normal Barioth, with differences in coloration. Its underside is purple and its fangs are sky blue in color.

Frozen Barioth have special breath attack, which, if impact the ground, will create a large icy tornado larger than that of normal Barioth, and will also leave a patch of snow that can inflict poison and snowman onto a hunter who comes into contact with.

Frozen Barioth behave similarly to normal Barioth, but they tend to use their breath attack very frequently.

Retrieved from "https://monsterhunter.fandom.com/wiki/Frozen_Barioth?oldid=831168"
Community content is available under CC-BY-SA unless otherwise noted.