Second
Furious Rajang is a Fanged Beast and a Variant of Rajang first introduced in Monster Hunter Freedom Unite.

Furious Rajang's appearance resembles that of an enraged Rajang by default. Its Rage mode shows that its fur stands up and it is visibly electrified by an electric aura. Additionally, Furious Rajang does not possess a tail.

Similar to its' base counterpart, Furious Rajang is an extremely aggressive monster. It boasts all of the same attacks that a Rajang possesses, however it has different thunder attacks it can perform, including a barrage of electric balls that it shoots in the air and a ground slam that sends out electric shockwaves in front of it, and true to its name, is much more aggressive than its normal counterpart. Furious Rajang also features the ability to attack when knocked into a wall, performing an electric beam rather than it jumping into an enemy. Because of their lack of tails, Furious Rajang cannot be taken out of its' rampage mode through hitting the tail, rather having to be struck in the head.

For carves and materials from other games, see Furious Rajang Carves 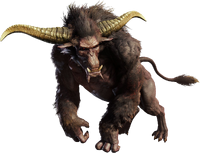