Gajalaka are Lynians first introduced in Monster Hunter: World. These tribes can be found in the Ancient Forest, Wildspire Waste, Coral Highlands, Elder's Recess, and the Caverns of El Dorado. They become immediately hostile when approached to close range. By accepting quests from the Lynian Researcher, hunters can gain benefits from the tribe such as shortcuts, tailriders, and the Palico gadget Mewlotov Cocktail. They are the only Lynian tribe in the New World to be ruled by a bigger and stronger leader, the Gajalaka Chief.

Like many Lynians, Gajalaka are short humanoids. They resemble Shakalaka more than Felynes or Grimalkynes, lacking any fur and wearing large tribal masks which leave only their bright yellow eyes visible. These red masks have different color accents, ranging from blue to yellow to purple, to represent what status ailment their weapons afflict. The Gajalaka in the Caverns of El Dorado have golden masks. The Gajalaka Chief looks like a larger version of a standard Gajalaka. The King wears a big, red mask with long, white moustaches, plus a pile of metal objects, such as a candlestick and various pots, on top of his head, functioning as a crown. He wields a broken steering wheel as a weapon.

The Gajalaka are aggressive towards large monsters and hunters, and will attack with status-afflicting weapons if threatened. The Gajalaka are capable of dealing Sleep, Paralysis, and Poison to both large monsters and players alike. You can tell these apart by the color of their mask's accents; blue represents sleep, yellow represents paralysis, and purple represents poison. Gakalaka can accidentally poison each other if they get crossed up in skirmishes.

The Gajalaka, if found and recruited in the Lynian Expert questline, will aid the hunters in their hunts. However, only certain ones will. The Gajalaka can also help in a way like the Grimalkyne Ivy Trap, but instead of trapping a monster, they pelt it with bazooka-like weapons, dealing substantial damage against it.

The Gajalaka Chief displays improved combat skills compared to standard Gajalakas. His moveset includes a rapid series of weapon strikes and an enraged mode. His fight resembles another old monster, the King Shakalaka.

Upon defeat, Gajalaka's will bury into the ground and escape. They drop no craftable parts of their own but instead a small list of supply items for the hunter to claim. 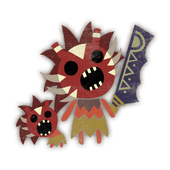 The Gajalaka Chief encountered by Geralt of Rivia in the crossover Special Assignment between Monster Hunter and The Witcher 3.