Gajau is a Fish introduced in Monster Hunter 3 [1], originally under the name Catfish and considered part of the Fish, it received its own classification and new name in Monster Hunter: World. This vicious piscine forms groups to defend their territory from intruders and aggressively protects their habitat. Gajau can be encountered in bodies of water in the Ancient Forest and Wildspire Waste. Their materials can be used to craft the Gajau Boots.

Gajau have greenish scales with orange dorsal fins. They resemble catfish in appearance. In their original appearance in the third generation, they were classified as Fish. In World, Gajau were initially classified as Piscine Wyverns prior to being changed back into Fish with the April 19, 2018 patch.[2] 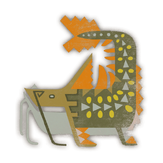 Retrieved from "https://monsterhunter.fandom.com/wiki/Gajau?oldid=809143"
Community content is available under CC-BY-SA unless otherwise noted.