Gammoth resembles a real-life Woolly mammoth. It is by far the largest Fanged Beast known to date. The fur covering its huge body is mostly bluish, although it's also white and red on its trunk, legs, back and underside. It has brown plating covering most of its head and feet, as well as two tusks seemingly made of the same material. This plating is said to be extremely resistant to damage. The underside of its trunk seems to be covered in a scaly hide, and is lined with numerous spikes. Its eyes are small and on the sides of the head. Interestingly, Gammoth is sometimes seen with its legs encased in snow clumps.

Gammoth is able to breathe snow from its trunk, encasing enemies in it. This snow can also be applied to its legs, encasing them in an icy armor. It can also use its trunk to create a large vortex, sucking hunters in from a distance so it can trample them more easily. However, Gammoth mainly uses its brute strength and sheer size to deal with threats.

Gammoth are hostile to just about anything. They are particularly hostile towards Tigrex, however. This is said to be because Tigrex is the natural predator of young Gammoths, and as Gammoth grows older its fear of Tigrex is replaced by rage and aggression.

Gammoth lives in polar regions, such as the Polar Field, Frozen Seaway, and Arctic Ridge. 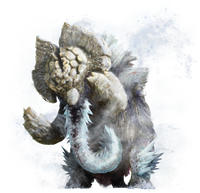 Retrieved from "https://monsterhunter.fandom.com/wiki/Gammoth?oldid=863676"
Community content is available under CC-BY-SA unless otherwise noted.