Gastodon is a Herbivore first introduced in Monster Hunter: World. These pack animals live in herds found around volcanic areas such as the Elder's Recess.

Gastodon resemble a cross between a theropod dinosaur and a bison. They are covered in scales but have large furry manes and horns reminiscent of a bison. When angered, they will glow red. 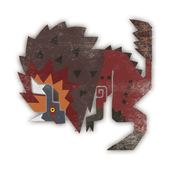