Gasurabazura are poisonous Brute Wyverns with brown scales and light skin tone underbellies. On their faces, Gasurabazura has purplish scales one on their chins, a pair of big canine teeth and one pair of big tusks with two pairs of smaller ones near them, a mouth full of sharp teeth, and a pair of downward folded brown oral frills. Gasurabazura is also equipped with a white pinkish webbed club-like tail that has long purple tipped light brown spikes. Similar to Brachydios, Gasurabazura has a pair of long, highly developed forelimbs with a pair of three light brown spikes with purple tips on them. On the top of their heads through tails, Gasurabazura contains a downward sail with purple tips on them as well on the talons of their feet. They also have a pair of downward sail on their hips which connect to their tail. Lastly, Gasurabazura has a pair red eyes with black slit pupils. While calm they huff poison and have droplets dripping from various points.

When enraged, Gasurabazura highly developed forelimbs and club-like tail will grow bigger. Gasurabazura's oral frills will be unfolded upwards to show the inside of them which are a white purplish color. Their downward sails will flare up and the pores throughout their bodies will release steam.

Gasurabazura are strong and mobile monsters, being capable of running quickly and even burrowing with great speeds using their arms, creating pit traps and structures to trap or crush prey. Their diet of Kusubami has also granted them tons of poison to use. They can create large toxic bubbles, breath out streams of poisonous sludge, and even fill their pit traps with poison.

When enraged Gasurabazura will pump blood into its tail and hands causing them to expand, and unfold its sail and frills. In this state it no longer uses its poison and instead relies purely on brute force and manipulating the sand with its arms and tail. In ways such as slamming the hands together creating a shockwave, swiping their claws through the sand sending waves running a short distance, and charging forward while dragging its claws through the dirt before ripping up a large rock and tossing it backwards over its head.

Gasurabazura are brutal and viscous fighters and are considered the apex monsters of the White Lake, yet oddly always seem to display a cautious behavior when not fighting, almost as if on the lookout for something.

The White Lake is the only habitat they have been found in. 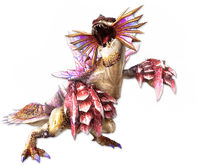