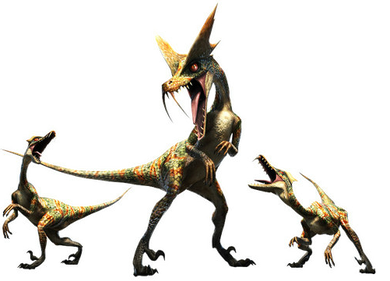 Hunters can easily identify a Gendrome by their big crest and slightly larger size compared to a Genprey. The crest signifies leadership over the pack.

With a pack to protect them and paralyzing fangs, they are a force to be reckoned with. Considerably harder than a Velocidrome, Gendrome pose a challenge to novice hunters. Quick attacks and high speed allow them to attack with surprising power.

Gendrome are in charge of making sure their pack is kept alive and healthy. They choose which prey to hunt, and will often lead the attack. Gendrome will also actively patrol their territory alongside a handful of Genprey.

They mostly inhabit the Desert, where their green-yellow scales serve as good camouflage. They have, however, also been spotted in the Swamp, Sunken Hollow, Primal Forest and Great Forest.

For details on older games this monster has appeared in, see Gendrome Guides.

Retrieved from "https://monsterhunter.fandom.com/wiki/Gendrome?oldid=862420"
Community content is available under CC-BY-SA unless otherwise noted.