A True Foe, The Carnivorous Leader

Giadrome is a Bird Wyvern introduced in Monster Hunter Freedom 2. 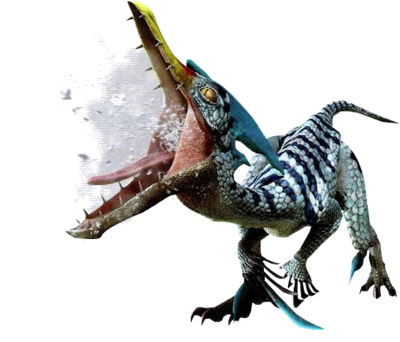 It is physically very similar to the Velocidrome, the only key difference being the pale blue colouration and the presence of a frost sac.

Not only does it sport more powerful attack power and higher defense than ordinary Giaprey, it is also capable of spitting a frozen substance that can immobilize prey and foes alike.

The Giadrome is quite territorial towards other monsters and other Giadromes. It travels alongside its pack and coordinates attacks using barks and calls.

The Giadrome is found in the Snowy Mountains and Clamorous Ridge.

Retrieved from "https://monsterhunter.fandom.com/wiki/Giadrome?oldid=844014"
Community content is available under CC-BY-SA unless otherwise noted.