Giaorugu has blue, yellow-tipped dorsal plates, a light blue scaly hide, and a blueish white underbelly. The two head crests of Abiorugu have fused together to form one larger, stronger crest ringed with spines; it also has a long snout, spikes that grow on its jaw, and two long fangs protruding from its jaw. Its legs are muscular and powerful, like all Brute Wyverns, and reinforced with spines. Giaorugu's tail is large, slim, and resembles a blade. It is also unique; when slammed into the ground, it will become encrusted with ice, which makes all attacks with the tail more far reaching and powerful. Its head-plate spikes, jaw spikes, claws, toes, diamond-shaped spikes, and tail blade are light yellow in colour.

Giaorugu uses Ice attacks, in contrast to the Abiorugu’s Fire. It is also capable of cartwheeling its body and rolling directly forward to attack in a wheel-like fashion similar to that of Uragaan. It can shoot an ice beam, similar to Ukanlos, and can utilize its jaw to throw boulders. Giaorugu can also cover its tail in ice, adding an extra layer of protection and giving it more range.

Giaorugu is an active predator. It is aggressive and more than willing to battle any perceived threat that enters its territory.

Giaorugu normally inhabits frigid locations like the Polar Sea and Yilufa Snowy Mountains, where it is dependent on for its ice-tail attacks. Hunters may also fight it in the Fortress Ruins. 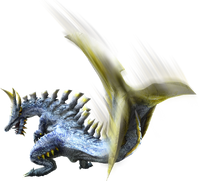