Giaprey is the name of a breed of Velociprey that calls the Snowy Mountains home. 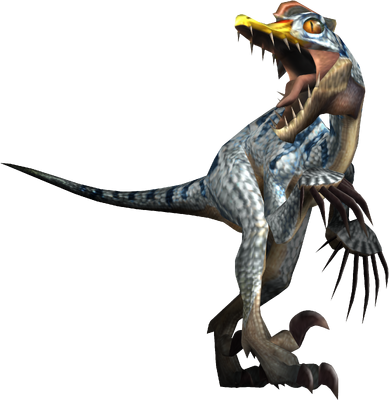 They have crystal blue scales with sky blue stripes. Although they are of a different species, White Velociprey have been seen in packs of Velociprey. Like all of the '-prey' family, this sub-species also fights in a pack.

They are a little stronger, physically and defensively, than the average Velociprey, and are noticeably tougher than their counterparts in battle.

They also have an added ability to spit ice to attack hunters, and being able to freeze a hunter like Blangonga. Although stronger, they still have about the same accuracy.

Retrieved from "https://monsterhunter.fandom.com/wiki/Giaprey?oldid=667538"
Community content is available under CC-BY-SA unless otherwise noted.