View source
watch 02:09
What is Glavenus?
Do you like this video?
Play Sound

Glavenus is a large Brute Wyvern with dark red scales covering its body. Two rows of blue, bony plates run along its back, going from the eyes to the tail. Its underside is more of a cream color. The unique feature of Glavenus is its huge, sword-like tail. The tail was originally the same color as its back plates, although it will turn a rusty color or a fiery red during the battle. Its hind legs are powerful and muscular, while its arms are much smaller and mostly useless in combat. The face and jaws are covered in sturdy plating, particularly resembling the head of a Carnotaurus, though the arms and proportions are modeled after Tyrannosaurus.

Relentless and aggressive, Glavenus often drags its tail across the ground and roars at its foes, revealing the heat and fire glowing in its throat in an attempt to scare off enemies. Not only is it considered one of the strongest Brute Wyverns, it is even believed to be the most intelligent as well.

Glavenus is able to sharpen its blade-like tail in its mouth to scrape its tail off the soot and ores, making its tail blade brand new. When the tail blade is in the sharpened state, attacks using its tail will gradually heat the tail up, which in the end, turning the tail red hot. During this heated state, the attack power of the tail significantly increases, as well as creating explosion and fiery wave with its tail. However, after some time has passed, the red hot tail blade will cool down, turning it dull and rusty color, in which the monster will resharpen to restore the tail to its original property.

By sharpening its tail using its mouth, Glavenus will swallow the soot and ore, in which it is stored in an organ in its throat, called a Bursa, which heats up the ores inside, turning it into a magma-like substance that it can spit out of its mouth, which explodes after some time has passed. During this state, its throat area will glow red.

Glavenus has been seen inhabiting deep forested areas like the Jurassic Frontier and Jungle, arid deserts like the Dunes and Desert, and volcanic areas like the Volcano and Volcanic Hollow. It can also be found wandering the Tower. 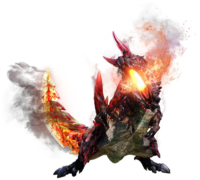 A Deviant of Glavenus first appearing in Monster Hunter Generations.

For carves and materials from other games, see Glavenus Carves