Gobul is a Leviathan introduced in Monster Hunter 3.

Gobul is a uniquely-evolved Leviathan reminiscent of angler, stingray, and puffer fish, along with traits which are calling cards of Catfish (the tentacles below its mouth). Its body is covered in purple scales, and a bright, bio-luminescent lure dangles from its forehead. It possesses a gargantuan mouth filled with equally formidable teeth. Its back features an array of retractable spines, and its tail is tipped with quills which are capable of inflicting paralysis if touched.

Gobul's massive mouth and throat mean that it can swallow prey almost as large as itself completely whole. Its lure can violently emit blinding flashes of light to disorient prey to make for an easy meal. When enraged, it is capable of puffing out its body like a balloon to appear more imposing. Gobul can use the plant-like whiskers on its chin and natural camouflage abilities to blend into the river floor and remain undetected by prey.

Gobul is often relatively passive until attacked. It spends most of its time lying under the river bed, exposing only its whiskers, to disguise itself as a common plant. While it tends to stay in the water, it does sometimes climb up on land, even if not chasing after prey.

Gobul is found in the Flooded Forest and the Deserted Island. It largely remains in the various lakes and rivers of the region, although it can come onto land. 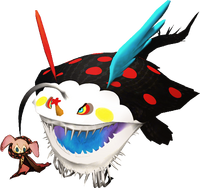 A Variant of Gobul that appears in Monster Hunter Explore.