Gogmazios is an Elder Dragon introduced in Monster Hunter 4 Ultimate. 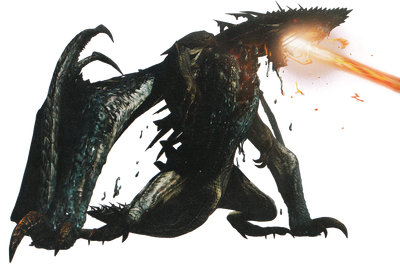 Gogmazios is a massive Elder Dragon with a body structure similar in nature to that of Gore Magala and Shagaru Magala. It has a large, heavy head with red eyes and rows of sharp teeth. When it uses its Oil laser attack, a glowing pattern, reminiscent of a scowl, is present beneath its chin, giving it the semblance of a second face. Its wingarms feature membranes that almost completely retract when not in use, and its body is covered in thick, powerful scales, carapaces, and spines of an indigo colouration. Perhaps the most notable features of Gogmazios's body are the ever-present covering of a sticky, tar-like substance which it uses to incapacitate prey, and the presence of an ancient dragonator lodged in its back.

Despite its enormous size, Gogmazios is fully capable of flight thanks to its incredibly powerful wings and presumably light skeleton. It is capable of firing a laser-like beam of superheated oil at attackers, and can use its immense size and weight to batter opponents into submission.

Gogmazios has a highly unusual diet of gunpowder. It eats this substance in vast quantities and is known to raid armories and warehouses in order to feed on it in bulk. It is highly aggressive and will attempt to destroy anything that threatens it or attempts to stand in its way.

The natural habitat from whence Gogmazios originated is completely unknown, however it is theorized by the Guild that it may have come from the Swamp or the Old Swamp. Its vast territory and aggressive nature often result in it attempting to attack the Battlequarters and Dundorma.

Retrieved from "https://monsterhunter.fandom.com/wiki/Gogmazios?oldid=812653"
Community content is available under CC-BY-SA unless otherwise noted.