Gogoma are large primate-esque Fanged Beasts covered mostly in red fur with dark red and cream stripes, with cream patches in certain areas. They have blue faces with two small beige streaks running from the top of the eyes to two small dark blue horns. They also have long tails ending in a wider flat tip and large brown paws which have round openings in them right below the huge curved claws.

Often seen alongside them riding their backs is the young of the species known as Kokomoa, which aside from their overall smaller bodies and overall juvenile appearances, they don't really appear any different physically from adults.

Gogomoa's most unique trait is its ability to produce a thick sticky elastic substance reminiscent of a spiders silk from special organs located within their arms which they release through the pore-like holes on their palms. They use this substance to restrain opponents, grab and throw objects such as poisonous and sedative plants that grow in the trees of their habitat, or for moving around quickly and even hanging around high up in trees to sleep, safe from harm.

Gogomoa are relatively peaceful and solitary creatures mostly spending their days swinging around and eating. Those with Kokomoa however are a different story, especially females. They are fiercely protective of their young and in the case of females will attack anything that gets near them or the Kokomoa with them. If said Kokomoa's get hurt by anything it will make any Gogomoa go berserk and become way more dangerous than normal.

Gogoma have only been found living amongst the trees on the Tide Island. 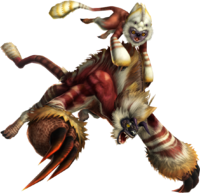 HC Gogomoa is first able to be hunted at SR5.

A new attack for the Gogomoa is an aerial one, where it jumps into the air to grab a large coconut, in order to throw it against a tree causing its shell to shatter and fly about. These can inflict both Poison and Sleep. Gogomoa may also shoot a web strand forward, then use it to swing in a circle around the area. In addition to rolling backwards, Gogomoa is now also capable of rolling sideways, and is able to shoot multiple webs at treetops to pull down a plethora of branches, crashing them down on anyone standing below it covering a wide area.

At SR100 HC Gou Gogomoa has a considerable movement speed increase for all of its attacks.