Goldbeard Ceadeus is an Elder Dragon and a Subspecies of Ceadeus introduced in Monster Hunter 3 Ultimate. 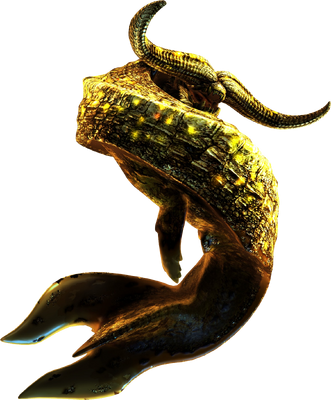 Although its relationship with regular Ceadeus is unknown, this subspecies is seemingly a fully-grown Ceadeus. Goldbeard Ceadeus is of a darker coloring, having developed a lustrous golden hide and darker brown underbelly, with a more pronounced mane. Unlike the regular Ceadeus, both of its horns are large and symmetrical, overtaking its remaining eye. In addition, both horns can be broken off which yields a total of four carves.

Goldbeard Ceadeus is capable of firing a current beam that can be swept from right to left, in addition to the usual vertical attack. It is also known to quickly swim to the top of the ruins, so as to fire a sweeping current beam which affects a wide area.

Retrieved from "https://monsterhunter.fandom.com/wiki/Goldbeard_Ceadeus?oldid=849878"
Community content is available under CC-BY-SA unless otherwise noted.