View source
watch 01:33
Who is Gore Magala?
Do you like this video?
Play Sound

Gore Magala are monsters of an unknown type introduced in Monster Hunter 4.

Gore Magala is a very unique wyvern, sharing traits and similarities to that of the Elder Dragons, possessing six limbs, including the clawed wings on its back. Though, its overall appearance and stance resembles a quadrupedal wyvern. Its body is covered in dark exoskeleton plates, with notable features including the hidden feelers that are folded alongside its face, the lack of visible eyes and fanged jaws that are actually parts of its external armor plates. The other unique part is its wings, which are covered in jet-black fur that resemble a tattered and ragged cape. The claws on its wings are extremely prehensile, and even seem to possess opposable thumbs. They are used for grabbing, help at running and maintaining stability. When not engaged in combat, Gore Magala tends to cloak its body with its wings by latching them onto its back.

The pollen-like scales of Gore Magala are used to understand their environment and leave behind a trail that Gore Magala uses to see both predators and prey by heat, and also act as the vector for the pathogen known as the Frenzy Virus. As Gore Magala's senses increase and become better from these scales, its color under its wings will slowly change and get brighter. When its sense are at their highest peak, two feelers will poke out from its head and it will release large amounts of scales into the air. The hairs will darken the sky as if an eclipse was in the area and it will begin to walk on all six. This state is known as the Frenzy State.

Gore Magala is known for inhabiting places like the Ancestral Steppe and Jurassic Frontier. 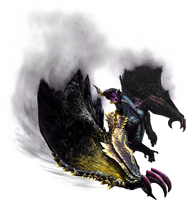 Chaotic Gore Magala is a rare special Gore Magala individual that has failed to molt properly into a Shagaru Magala and has only molted half way on one side of its body. It also has a different music theme which has parts of Gore Magala's and Shagaru Magala's respective theme music as well as the Apex theme.

This Variant of Gore Magala first appeared in Monster Hunter 4 Ultimate with a separate Icon, yet in game it does not have a separate name from an ordinary Gore Magala.