Great Jaggi is a Bird Wyvern introduced in Monster Hunter 3. 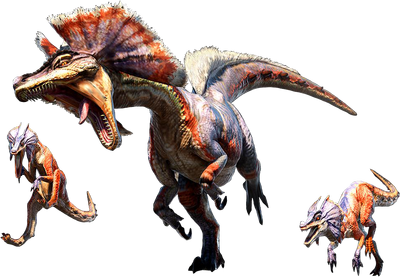 Great Jaggi's distinctive feature is its frill and the lavender scales with the crimson and tangerine overrides on the frills and the abdomen part, but also the furs that grow on its neck and along the back down to the middle tip of the tail.
Great Jaggi's muzzle are particularly thinner and much more wrinkly than the other Bird Wyverns. While the tail has some barbs on each sides, they are notably blunt and definable even used for its tail whip attacks.

Great Jaggi, along with the Great Baggi, may attack other boss monsters instead of focusing solely on the hunter, indicating a highly competitive and intelligent demeanor. It can also call its pack of Jaggi to its aid at any time with a loud, resonating roar. Being a larger and more powerful dominant male of Jaggi and Jaggia, it is considered by players to be the boss of these monsters. Its alpha status is much more prominent than that of previous Dromes, as it features many of the characteristics of full-fledged boss monsters — the ability to become enraged, limping when weak, and having a breakable part. One should note that the Great Jaggi can be summoned by the Qurupeco at the Deserted Island, Sandy Plains and the Misty Peaks.

For details on older games this monster has appeared in, see Great Jaggi Guides.

Retrieved from "https://monsterhunter.fandom.com/wiki/Great_Jaggi?oldid=812506"
Community content is available under CC-BY-SA unless otherwise noted.