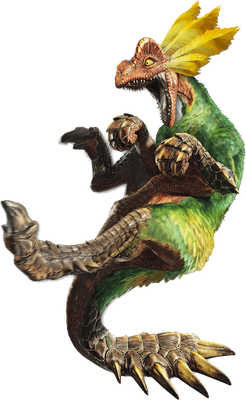 The Great Maccao's feathered crest sets them apart from its Maccao pack. Although superficially similar to its younger brethren, a Great Maccao is bigger and bulkier, with more brightly-colored plumage. It also has powerful legs it uses to kick threats and to move with great speed, and its spiked tail allows it to propel itself forward and jump with tremendous force.

Great Maccao has powerful legs it uses to kick threats and to move with great speed. It can stand on its tail and launch itself forward. Should its tail be damaged, it will be heavily restricted due to relying on its tail for offense and movement.

Unlike other Theropod Bird Wyverns, Great Maccao exhibits little to no control over its pack. It would much rather run than stay and fight alongside the Maccao. However, it is known to work with its pack to hunt large prey.

Great Maccao has been seen inhabiting the Jurassic Frontier and Ancestral Steppe.

Retrieved from "https://monsterhunter.fandom.com/wiki/Great_Maccao?oldid=818273"
Community content is available under CC-BY-SA unless otherwise noted.