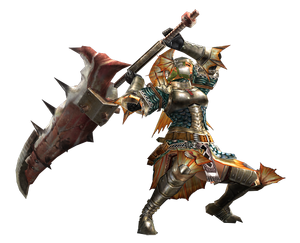 The Great Sword (大剣 Daiken), a classic weapon first introduced in Monster Hunter, is a weapon capable of dealing massive damage. Its way of use has changed since Monster Hunter 2, when it was given a charged attack. The weapon tree for the Great Sword is divided between 2 main branches: the Buster Sword branch and Bone Blade branch. The Buster Sword branch has slightly less overall sharpness than the Bone Blade in exchange for a wider amount of elemental damage up its sleeve, but both sides have generally lower sharpness bars than other weapons, so it's wise to have sharpening tools around.

As a weapon which has its own depth of usage and requires a certain amount of training to be able to master and fully use, the Great Sword is not just any big pointy stick. It can also block with the R button, serving as a shield with slightly better protection than the Sword and Shield, as well as a fast-draw shielding ability activated by holding down the R button and then pressing triangle and circle. This shielding ability comes with a downfall, however, as each time you shield an attack the sword will lose sharpness.

Great Swords require a certain amount of experience to wield properly and master. To a novice, they may seem very slow and unwieldy. However, in the hands of an experienced hunter, they can prove very useful with a very nice damage output. See the Videos section ahead, as there are tutorials on becoming a Great Sword master.