Grimalkyne resembles bipedal lynxes. They have tufted ears, and come in a variety of colors depending on the tribe:

Grimalkyne are wary of strangers,[1] but will readily help those who have proven themselves to their tribe. Once befriended, Grimalkyne will share their tools and assist in trapping monsters. They mark their territory with doodles and their dens are usually well hidden. Grimalkynes of tribes that have been befriended can appear in locales outside their domain. Grimalkynes' vine trap cannot ensnare Elder Dragons. 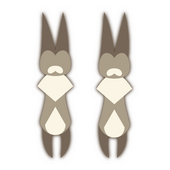