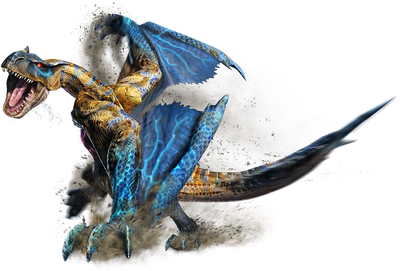 The Grimclaw Tigrex's forelimbs and head have a blue coloration with visible pulsating veins. When enraged, these veins pulsate red instead of blue, and are also visible on the Tigrex's chest.

Sometimes when Grimclaw Tigrex misses hunters while charging, they will quickly sharply turn their bodies toward the hunters with their claws in the ground to throw a huge boulder, or a huge snowball, at them.

In MHX, or MH Gen, Grimclaw Tigrex are capable to slam their claws into ground to spawn large gold pillars of energy that destroy the ground in front of them, before they disappear.

In MHXX, however, Grimclaw Tigrex instead spawn pillars of steam when slamming on the ground with their claws.

Grimclaw Tigrex are a lot more hostile than a normal Tigrex. Due to this, hunters are required to have a special permit in order to hunt a Grimclaw Tigrex.

Like their pre-evolved relative, Grimclaw Tigrex can adept to almost any environment they travel in search of prey.

Retrieved from "https://monsterhunter.fandom.com/wiki/Grimclaw_Tigrex?oldid=797410"
Community content is available under CC-BY-SA unless otherwise noted.