The Guild Knights (Japanese ギルドナイト) are special hunters trusted to protect the Hunter's Guild and to oversee hunters. 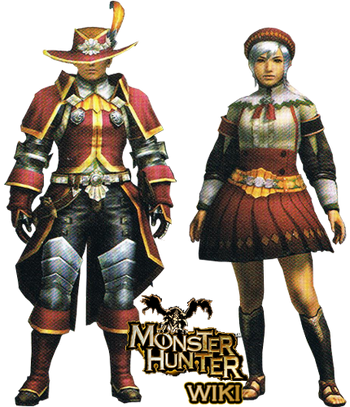 What Does A Guild Knight Do?

The main job of a Guild Knight is to hunt down poachers or other illegal hunters, and wanted murderers, before killing them. This also applies to hunters that break the rules of the Hunter's Guild. Guild Knights also act as negotiators for settlements and also collect info on monsters unknown to the public like Gore Magala.

In each district and outpost of the Hunter's Guild, there can be at least twelve Guild Knights in one location at a time though there can sometimes be less. In Minegarde Town, there are nine Guild Knights that protect the town. If an emergency situation happens during their post, they'll try to keep order by acting as leaders.

The Guild Knights are considered to be as strong as hunters, making them a deadly force against threats. However, their uniform is quite different from what some would expect. A Guild Knight's uniform is able to enhance the users strength in someway while the replica, worn by some hunters, does not.

Retrieved from "https://monsterhunter.fandom.com/wiki/Guild_Knights?oldid=815690"
Community content is available under CC-BY-SA unless otherwise noted.