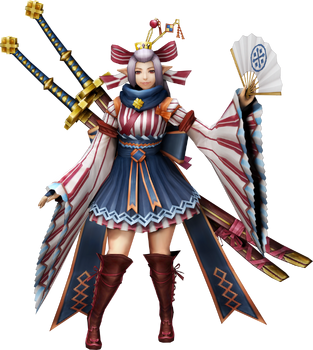 She is a very dignified woman. During Valentine's Day, she will put up special quests so that male hunters can try to win her affection.

Before coming to Mezeporta, she lived in an unnamed remote area. By the requests of her grandfather, the old Guild Master, she was brought to Mezeporta and became the new acting Guild Master due to him retiring. She made it to Mezeporta by flying on the Large Exploration Ship, though her arrival was slightly delayed due to a Shantien rampaging in the skies. While on her journey to the location, she encountered a new Elder Dragon, now known as Garuba Daora, in the clear skies. When she arrived, she immediately became the new Guild Master. Like her grandfather, she gives the hunters different types of quests, such as hunting quests. These quests can have powerful legendary monsters like Akantor and White Fatalis. By doing these quests, along with other objectives, she will give hunters special books that contain instructions to rarely seen hunting styles.

She wears a beautiful kimono with the Hunter's Guild insignia on her chest. She wears long boots and usually holds a fan. This Guild Master is well-known for having two long swords on her back, similar to some samurai.

Retrieved from "https://monsterhunter.fandom.com/wiki/Guild_Master_(New)?oldid=748966"
Community content is available under CC-BY-SA unless otherwise noted.